In rural communities, finding transportation to basic health care services can be difficult. So what if instead of making people come to health care – the health care came to them?

Well, the Mobile Mammography Van through Ellis Fischel Cancer Center is working to do just that - bringing preventative mammogram screenings to rural communities.

The Mamm Van is a 44 foot long van, with three female staffers and everything needed for a comprehensive breast cancer screening on the go. It had been in Boonville since about 8 a.m. and the staff onboard said they expected to see 20 or so women that day. 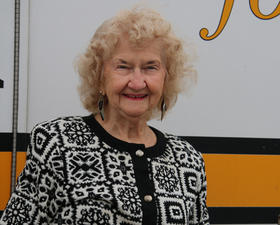 Harriet Jones is one of the van’s patients. At 92, she is a longtime Boonville resident and has been coming to receive her twice yearly mammograms on the van for many years. She said it's safer and more convenient for her to come to the van.

“Oh, it is wonderful,” Jones said. “We don’t have to make the trip to Columbia, and we don't have to get on Highway 70. I’m always kind of scared of it. Especially when you get older, you shouldn’t be driving on Highway 70.”

Jones was just one of the many patients the staff saw that day, and she received a three part appointment – mammogram, manual exam and education – in the span of about 15 minutes.

Here's Dee Dokken, one of the Mamm Van's cancer screening nurses, to explain.

“They've [patients] checked in and had their mammogram and then they come to me,” Dokken said. “And it’s very tight space so we waltz around so we can get the door shut. And then we have them sit here, I talk to them about their history, I look at them while they're sitting - how their breasts looks - we talk about that. And then they lay down and I do a hands on breast exam giving education at the same time.” 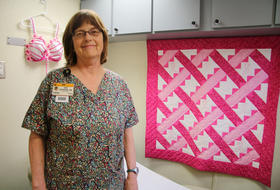 Now, the Mamm Van service isn’t all that new. It’s actually been around since 1992.

“There was a huge population in the rural counties that either they farm or they don’t have the capability to get to a facility where they can get their mammograms and so the purpose of the Mammogram Van was to go serve those underprivileged or people who couldn’t necessarily get to a facility to get these tests done,” Angie Oliver, the service coordinator for the van, said.

She said the Mamm Van’s original mission – to serve low-income populations in areas where access to a mammograms were more than an hour away – has expanded as the interest in the Mamm Van has grown.

“Now we pretty much touch anywhere that a site will actually ask us to come,” Oliver said. 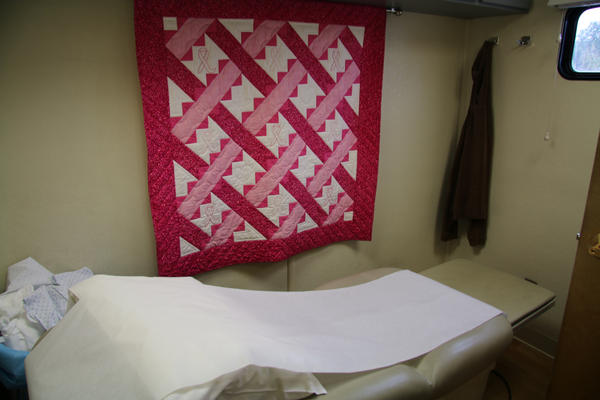 Oliver also said the Mamm Van’s patients come in for a variety of reasons. For some people it is just more convenient than driving to the nearest hospital, and those individuals often pay with private insurance. But for others, who may be low-income, the Mamm Van is an essential service.

“[They] would not be able to afford to have a mammogram or would not consider it vital to have done if they, you know, don’t have the money to do it,” Oliver said.

She added that the van’s elderly patients probably wouldn’t get preventative mammogram care either if this service was not offered.

“If they had to drive, a lot of elderly population would not - they would not drive in to have a mammogram done,” Oliver said.

Mammograms onboard the Mamm Van are provided to low-income patients at no cost, and Oliver said that so far this year, through one of its three funding sources, the van have served about 220 patients. She said they have served additional women through the other two funding sources. 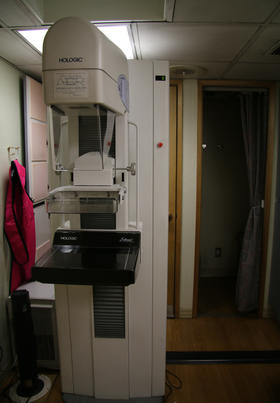 While there are several other mobile mammography screening vans in the state, the Ellis Fischel Mamm Van serves a large area. The van visited 28 counties, saw patients from 50 counties and screened more than 2,000 women during the 2015 fiscal year.

Dee Dokken, the screening nurse, said all of the staff loves the work they do on the van.

“We'd much rather be out, on the road, having adventures and meeting lots of nice women - than staying in the hospital most of the time,” Dokken said.

The van goes out to sites five days a week, except for holidays and a few Fridays for maintenance here and there. So at the end of the day, after the last patient has left, the three women staffers onboard the Mamm Van pack up and prepare to head home. To get ready for another day, another site.

Called Back After A Mammogram? Doctors Are Trying To Make It Less Scary

When I left my first mammogram appointment a few weeks ago, I felt fine.

Everything had gone smoothly, the technologist hadn't made a concerned face when she looked at the screen, and I was convinced I'd get the all-clear from my primary care doctor in a week or so.

Then came the phone calls the following day — first from my doctor's office, then from the mammography center — telling me the radiologist had seen something that didn't look quite right. I needed to come back for another mammogram and this time an ultrasound exam, too.

What Happens After You Get That Mammogram

WILLCOX, Arizona—Ask Sam Lindsey about the importance of Northern Cochise Community Hospital and he’ll give you a wry grin. You might as well be asking the 77-year-old city councilman to choose between playing pickup basketball—as he still does most Fridays—and being planted six feet under the Arizona dust.

How One Rural Hospital Learned to Thrive While Others Close Nationwide

When cattle farmer Greg Fleshman joined the board of Putnam County Memorial Hospital in rural northern Missouri in 2011, the hospital was on the brink of closing.

“Things we just falling apart financially and the morale of the employees. And it just seemed to get worse and worse,” he recalls. “Those were the darkest days.”