One Year Later, A Mother Reflects on Pregnancy and Premature Birth

One year ago, while reporting on infant mortality rates in Kennett, Missouri, I met a 27-year-old expectant mother named Marylouisa Cantu. She was pregnant with her seventh child.

Her sixth child, a daughter named Alyssa, was born two years earlier and had spent two weeks in a neonatal intensive care unit due to complications from premature birth.

“She was completely blue,” Cantu recalled at the time. “She was having respiratory breathing problems.”

While Alyssa came home from the hospital, many babies in this part of Missouri do not.

Complications from premature births are a leading cause of infant deaths, and the six-county Missouri Bootheel where Cantu lives has one of the highest rates of infant mortality in the country.

According to Bootheel Babies & Families - an initiative started to lower the region's infant mortality rate by 15 percent in 10 years - the Bootheel has an infant mortality rate of 9.6 deaths for every 1,000 births – for African-Americans, the rate was 12.0. That’s much higher than the average rates in both Missouri (6.5) and the U.S. (6.1).

There are steps mothers like Cantu can take to carry their pregnancies full term and help reduce the risk of infant mortality: consistent prenatal care, stress reduction and even permanent housing are all linked with positive birth outcomes.

One year ago, with the help of a counselor from the Missouri Bootheel Regional Consortium – which administers the federal Healthy Start infant mortality initiative in this region – Cantu was working on all of those with the aim of taking her pregnancy to at least 37 weeks.

When I followed up with Cantu earlier this month, she smiled as she introduced 8-month-old Anthony who was born last June.

Anthony was born after 35 weeks, which is considered premature. But Cantu says all of her pregnancies have lasted around 35 weeks, and Anthony was able to come right home. 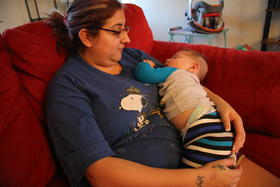 Unlike his sister Alyssa (who gave her little brother the nickname “Tony Baloney”), Anthony didn’t take to breastfeeding – which has been shown to improve a baby’s chance of survival. In many ways, however, baby Anthony came in to a much more stable environment.

When we spoke last year, Cantu was living with her mother after leaving a trailer she describes as, “not a good place at all.” But soon after our visit, her application for low-income housing through the Kennett Housing Authority was approved.

Now she lives in a 3-bedroom house with baby Anthony and three of her daughters. A fourth daughter lives with Cantu’s mother (“she’s a grandma’s girl”) and Cantu’s two other sons live with their father.

Baby Anthony’s crib is in Cantu’s room next to her bed. She keeps it clear of toys – accidental suffocation is a large contributor to infant deaths in the region – and has even become something of an evangelizer when she talks to other mothers.

“You can avoid smoking in the house, keep the baby’s bed cleaned out when you put him to bed and make sure there’s nothing where he can cover himself up,” Cantu says.

Cantu’s 15-year-old niece recently moved into her house. The niece is pregnant, and, in addition to the housing, Cantu offers guidance and support.

“I tell her everyday, ‘everything is going to be okay,’” says Cantu, who herself was 15 during her first pregnancy.

“Sometimes she’ll ask me personal things about her body and I tell her how it is and what to expect. What’s next and stuff like that.”

Cantu is also helping her niece get connected to same organization that Cantu has used for assistance getting prenatal care and for community support. Her niece also helps out with baby Anthony, learning how to bathe and feed him and to give him his medicine.

“She’ll sometimes think [having a baby] is not the thing for her,” Cantu says. Abortion is not an option in the family’s Mexican cultural tradition, Cantu explained.

“She’s going to get through it. Day by day, that’s how it took me when I was her age.”

How A Scientist's Slick Discovery Helped Save Preemies' Lives

In 1953, Dr. John Clements realized something fundamental about the way the lung functions — an insight that would ultimately save the lives of millions of premature babies.

The story begins in 1950, when the U.S. Army sent Clements, a newly graduated physician, to the medical division of what was then called the Army Chemical Center in Edgewood, Md. Clements was interested in doing research in biochemistry. His commanding officer was of a different mind.

Indiana is focusing resources on some of the state’s most vulnerable communities to address a major health inequity. Earlier this month, Governor Mike Pence signed legislation to authorize $13.5 million over the next two years to a grant program aimed at reducing infant mortality, a problem which disproportionately affects African Americans.

Every month, Cynthia Edwards breathes through a machine that can tell if she’s been smoking. If the machine registers a low enough number, she takes home a $25 voucher to help her pay for diapers for her five-month old son, Justus.

Teen Moms Trust Their Gut, Even When It Puts Their Babies At Risk

Does mother always know best? As a mom, I try to create the healthiest environment possible for my kids. I like to think my decisions are based on fact, but emotion plays a role, too. What happens if my choices aren't supported by medical research, and could even put my children at risk?