Access to Care
Coronavirus: What You Need To Know
The new coronavirus and the disease it causes, COVID-19, have interrupted our lives in countless ways. Our coverage details the medical issues surrounding coronavirus -- and the way it's changing the Midwest.

On the outskirts of Rantoul, in east-central Illinois, about 100 migrant farmworkers are living at an old hotel in a sleepy part of town.

Every day at the crack of dawn, Samuel Gomez and the rest of the crew get their temperatures checked on the way out the door. Most workers, donning masks, load onto a big yellow school bus for a 30-minute drive to a large warehouse, where they will spend the day sorting corn on large conveyor belts.

Gomez, who is from Mexico, is one of the lucky few with access to a car, so he drives to work with his dad and sister. He’s been here all summer, starting in the field roguing corn — removing diseased and off-type corn plants to increase the quality of the crop. Since September, he’s been working in the warehouse.

In the U.S., an estimated two to three million farmworkers plant, cultivate and harvest crops each year. Among them are migratory workers, like Gomez, who often leave behind family and friends for months at a time to find work that pays more than what they could earn back home.

The long hours and physical demands make the job risky any year, but the coronavirus pandemic has made it even riskier. Outbreaks across the U.S. linked to farms have some worried about the lack of protections for workers, upon whom the nation relies for food.

Gomez, 32, has been traveling to Illinois as a migrant worker for four years. When he’s working in the warehouse, he says he earns $12 an hour cleaning and sanitizing the facility — about double what he could make working in retail in Mexico.

Before he arrived in Illinois in June, he didn’t know anyone who had contracted COVID-19, so he says he wasn’t too concerned.

“Truthfully, I was surprised when people would talk about it. … It was something that didn’t exist, until I realized that it did,” Gomez says in Spanish.

Since June, there have been 21 cases linked to the hotel where Gomez and an entire crew of migrant workers are living, according to the Champaign-Urbana Public Health District. That's one of the largest outbreaks in Champaign County, based on internal data from July through September that was obtained by the Midwest Center for Investigative Reporting.

When Gomez arrived and witnessed the outbreak first-hand, he says the threat became very real, and he and his colleagues started taking requirements for mask-wearing, social distancing and hand hygiene more seriously.

Gomez says the warehouse looks different this year with fewer workers to allow for enough spacing to keep everyone safe. He says everyone is masked, and in general, he feels safe.

But he still worries about elderly workers, including his 66-year-old dad, because they share the same hotel room and work near each other.

“I worry about my dad because he’s older,” Gomez says. “I’m cautious for myself and for them. It’s what I can do.”

Josh, 24, also works at the corn processing plant. He asked to be identified only by his first name because he fears retaliation. Josh is an American, born and raised in Texas. He grew up in a migrant family as the oldest of four children. He wanted to study to become a medical assistant after high school but says when he graduated, his dad got sick and was unable to work. With his family in need of support, Josh now spends most of the year traveling around the country for work.

He says being in Illinois for the harvest season this year feels different. Since the outbreak, there’s been less socializing: no cookouts or parties.

“You can smell the air in the mornings and it just feels way different,” Josh says. “It’s not the same air I breathed last season, you know, you feel it.”

He also worries about COVID-19, but says he doesn’t have a choice when it comes to work. His family depends on him, and he hopes to save up so that one day he may be able to go to college.

“Either I risk it all or nothing at all,” he says. “I want to leave something behind. … I’m not gonna give up.”

No choice but to work

Many migrant workers make double what they could at jobs closer to home. It’s a prospect they simply can’t turn down, says Sylvia Partida, CEO of the National Center for Farmworker Health.

“Economic necessity … [is] what it comes down to,” she says. “This is their work and they rely on this work to survive.”

For migratory workers like Gomez and Josh, Partida says the risk of contracting the coronavirus is heightened — they often travel in large groups, live in congregate housing and are unfamiliar with the local resources available to them.

“There’s been a lot of fear and a lot of uncertainty,” she says. “[They’re] relying on organizations that might be able to assist them as they try to learn how to safeguard themselves.”

Partida’s organization has been tracking COVID-19 outbreaks among migrant and seasonal farmworkers — who are largely low-income and Latino — around the country. So far, outbreaks in 17 states, including several in the Midwest, have been documented in media reports. But because there isn’t an official tracking system in place, this count is likely an underestimation, Partida says.

The Food and Environment Reporting Network, which keeps a tally of COVID-19 outbreaks across the nation’s food system, reports more than 8,000 confirmed cases among U.S. farmworkers. Researchers from Purdue University, working in collaboration with Microsoft, estimate that the true number of coronavirus cases among U.S. farmworkers is much higher — about 140,000 — a number they arrived at by applying county-level infection rates to the number of farmworkers and farmers believed to be working in those counties.

In Illinois, COVID-19 cases among farmworkers are not closely tracked, but a clinic that caters to migrant and seasonal farmworkers reports that out of roughly 1,700 people tested by its staff since the start of the pandemic, 14% — or more than 200 — were positive.

Only 11 states — including Michigan, Wisconsin and Colorado — have mandatory regulations in place to protect farmworkers, according to an analysis from the Environmental Working Group. Many others have issued recommendations, Partida says, but she’s concerned they lack penalties for those who do not follow them.

“There isn’t any enforcement; no accountability,” she says.

In some states, the risks to farmworkers are compounded by deadly natural disasters fueled by climate change, including wildfires in the West. Partida says many states don’t include farmworkers in their emergency response plans.

In order for farmworker protections to be guaranteed, she says the U.S. Departments of Labor and Agriculture would need to step up to implement enforceable guidelines.

Until then, workers like Gomez and Josh will continue traveling to the next job and hoping for the best.

“That’s the risk we take as a migrant worker, to succeed in life,” Josh says. “Back in Texas, there’s not a lot of hope. Up here there is hope for a better future.”

This story was produced by Harvest Public Media and Side Effects Public Media, in collaboration with the Midwest Center for Investigative Reporting. 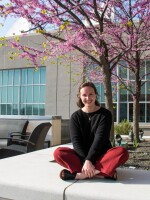 Dana Cronin
Dana Cronin is a reporter based in Urbana, Illinois. She covers food and agriculture issues in Illinois for Harvest. Dana started reporting in southern Colorado at member station 91.5 KRCC, where she spent three years writing about everything from agriculture to Colorado’s highest mountain peaks. From there she went to work at her hometown station, KQED, in San Francisco. While there she covered the 2017 North Bay Fires. She spent the last two years at NPR’s headquarters in Washington D.C., producing for shows including Weekend Edition and All Things Considered.
See stories by Dana Cronin
Midwest Checkup
Our journalism starts with you. What questions and concerns do you have about health care? Join our text group and let us know.
Sign up here
Sick Season 2: Available now
Incarcerated people are some of the sickest people in our country. Many have chronic conditions such as diabetes or lung disease. And they’re far more likely to suffer from mental illness and addiction. On Season 2 of Sick, listen to stories of what goes wrong in corrections facilities — places meant to keep people healthy, but built to punish them.
Subscribe now