It Takes A Village To Manage Diabetes

Treating Type 1 Diabetes isn't as simple as it seems. One common misconception: Your body has low insulin levels, which means you just need to fill up on more insulin, right? Not really.

Living with Type 1 Diabetes entails much more than self-injecting once at the same time, each day, as it includes checking blood sugar several times a day; counting the sugars (carbohydrates) in your meals; taking multiple doses of insulin; and figuring exercise and stress into the insulin dose calculations. Also, as I was recently reminded, life happens. So, between having to deal with puberty, school and, at times, disruptive homes, juggling the previously-mentioned list of tasks may seem like an insurmountable task for some kids and teens who live with diabetes.

Four months ago, a teenager visited my clinic, as checkup for his diabetes (these patients often meet with whoever is available at that time). In the last couple years, he had dropped out of high school, began working part-time, picked up a smoking habit (he claimed this happened when he was 15; or perhaps earlier, I’ll never know) and had been taking just enough insulin to stay out of the hospital. Without the time, resources, or initiative to pay attention, taking care of his diabetes took a backseat to his life, though he did (and still does) go to clinic every three months, as he should. He had great ambitions for his next visit: “I’ll check my blood sugar four times a day. I’ll take insulin with all my meals. I’ll have some friends help me with staying on top of things,” he said.

Now, he longer smokes. He takes insulin with all his meals. His diabetes control has dramatically improved, and along with it, his long-term health. He has the proverbial new lease on life. While this is, partially, due to his maturing, especially in his pre-frontal cortex (allowing him to comprehend consequences, as well as truly appreciate long-term goals), there had been one other equally significant change in his life: a new role model. Since last visiting the clinic, he had found a new part-time job, where his boss was letting him help in areas other than his entry-level position; a chance to move up the ladder. His boss became someone who he looked up to and respected. I’m convinced his new boss has no idea of the impact he’s had on this boy’s outlook, though I could be wrong. I’m just thankful there are people like him in the world, as his simple encouragement has helped one kid realize that taking care of his diabetes matters, even when the struggles of life get in the way. Sometimes it does take a village.

Dr. Jennifer Abuzzahab, MD, a pediatric endocrinologist at the Children's Hospitals and Clinics of Minnesota, writes blogs about various medical-related issues among children for soundmedicine.org. 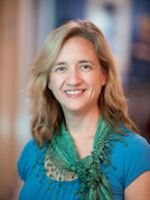 Dr. M. Jennifer Abuzzahab
M. Jennifer Abuzzahab, MD, is a Pediatric Endocrinologist at the McNeely Pediatric Diabetes Center and Endocrine Clinic at Children's Hospitals and Clinics of Minnesota. She has been working in Pediatric Endocrinology for 17 years. Endocrinology is the study of hormones—or the chemical text messages that are sent throughout your body. She is an unapologetic science nerd, and is passionate about pediatric obesity, growth disorders, endocrine consequences of cancer survival and endocrine disruptors. She is active in research; however, spends the majority of her time in clinic. She sees Sound Medicine as an opportunity to share her clinical experience with people who are not her patients.
See stories by Dr. M. Jennifer Abuzzahab
Sick Season 2
Incarcerated people are some of the sickest people in our country. Many have chronic conditions such as diabetes or lung disease. And they’re far more likely to suffer from mental illness and addiction. On Season 2 of Sick, listen to stories of what goes wrong in corrections facilities — places meant to keep people healthy, but built to punish them.
Subscribe now