Growing up, as the searing pain of a sickle cell crisis would spread through her veins, Tanjila Bolden-Myers would ask her mother if this time, it would kill her.

Many people with sickle cell disease will die prematurely, but treatment is improving. Doctors believe that the pain of a sickle cell crisis comes from the patient’s crescent-shaped red blood cells building up in the veins and cutting off oxygen to tissue and bones. If it persists, the lack of oxygen can damage vital organs. During a crisis, powerful painkillers are often the only relief.

But opioid-based medications are also highly addictive and have come under increased scrutiny as the rate of overdoses rises among the general public. In the emergency room, doctors frequently worry that the person in front of them is one of the estimated 1.9 million Americans who are addicted to pain pills, or one of the 19,000 or so who will die each year from an overdose, according to the American Society of Addiction Medicine.

Bolden-Myers works as a behavioral health specialist for St. Louis Public Schools and manages most of her pain with the Vicodin she keeps at home in a locked safe. Occasionally, an infection will trigger a pain so severe she has to be admitted to the hospital for a blood transfusion and other treatment.

“I have had to title drop, name drop, to say I have this degree and that degree, and say that I’m a certified trade counselor,” Bolden-Myers recounted. “I’m in tears, or I’m crying, or I’m rocking and moaning, and you just want to assume that I’m drug seeking.” 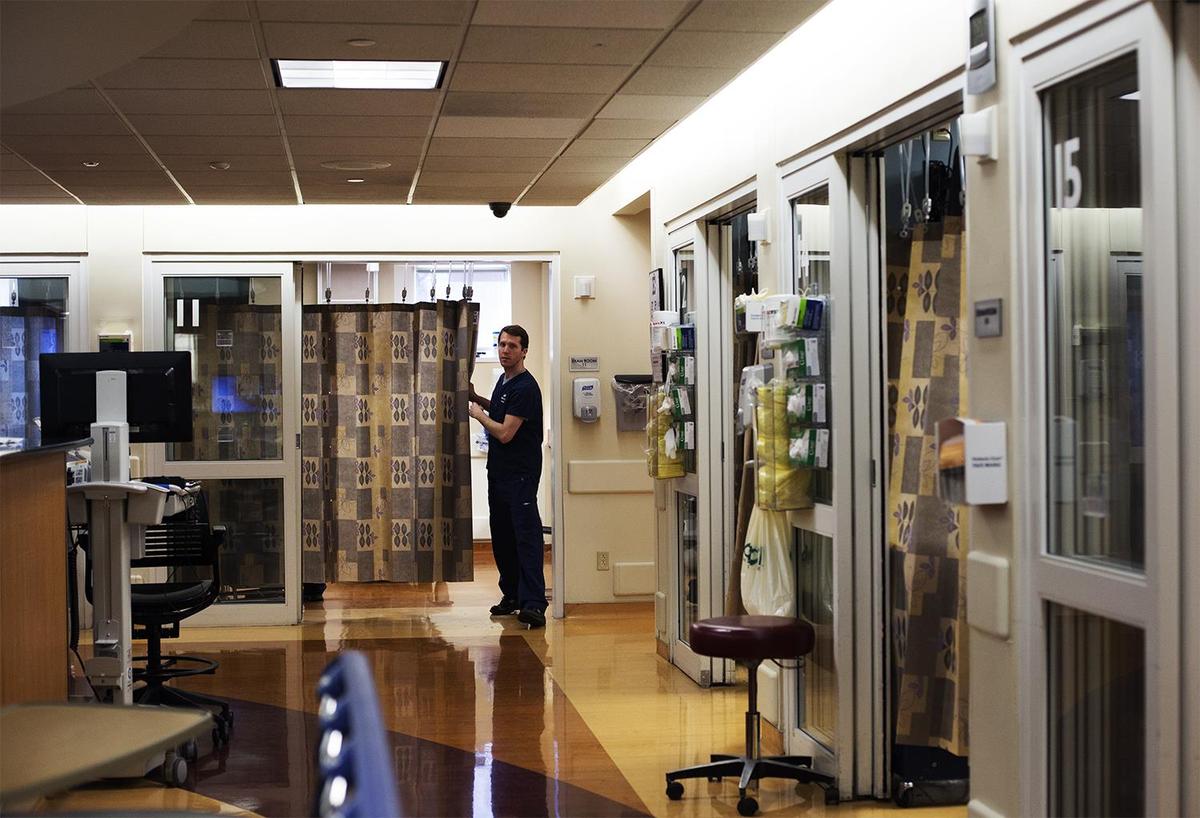 Implicit bias in the E.R.

At the center of situations like Boden-Myers' are issues of race and class. Sickle cell disease is hereditary and primarily affects people of African descent. The disease is also relatively common in Central and South America, Asia and the Middle East. U.S. health care providers say many of their patients come from low-income backgrounds and qualify for Medicaid coverage. When doctors believe they have to identify pill-seekers in emergency settings, but can’t reach a patient’s physician to verify a treatment method, implicit bias can fill the void.

“The default is, ‘This is a young black kid looking for drugs,’” said Dr. Allison King, a hematologist at St. Louis Children’s Hospital. She said most of the problems happen when her young adult patients visit unfamiliar emergency rooms. Protocols are already in place to fast-track pediatric patients.

“It’s almost like you have to carry some type of proof that you have sickle cell disease if you’re in an outlying area, in order to get pain meds quickly,” King said.

Based on the limited research that exists, less than 10 percent of people with sickle cell disease will develop a substance abuse issue, King said. That’s about the same rate of addiction as health care workers, and very close to that of the general public.

Providers estimate that about a thousand people are living with sickle cell disease in the St. Louis region. Of the seven patients St. Louis Public Radio met for this story, one shared a story of abusing opioids briefly after a traumatic experience, before receiving addiction treatment. That patient, and five others, reported being accused of pill-seeking in the emergency room, leading to delays in care or lower doses of medication. 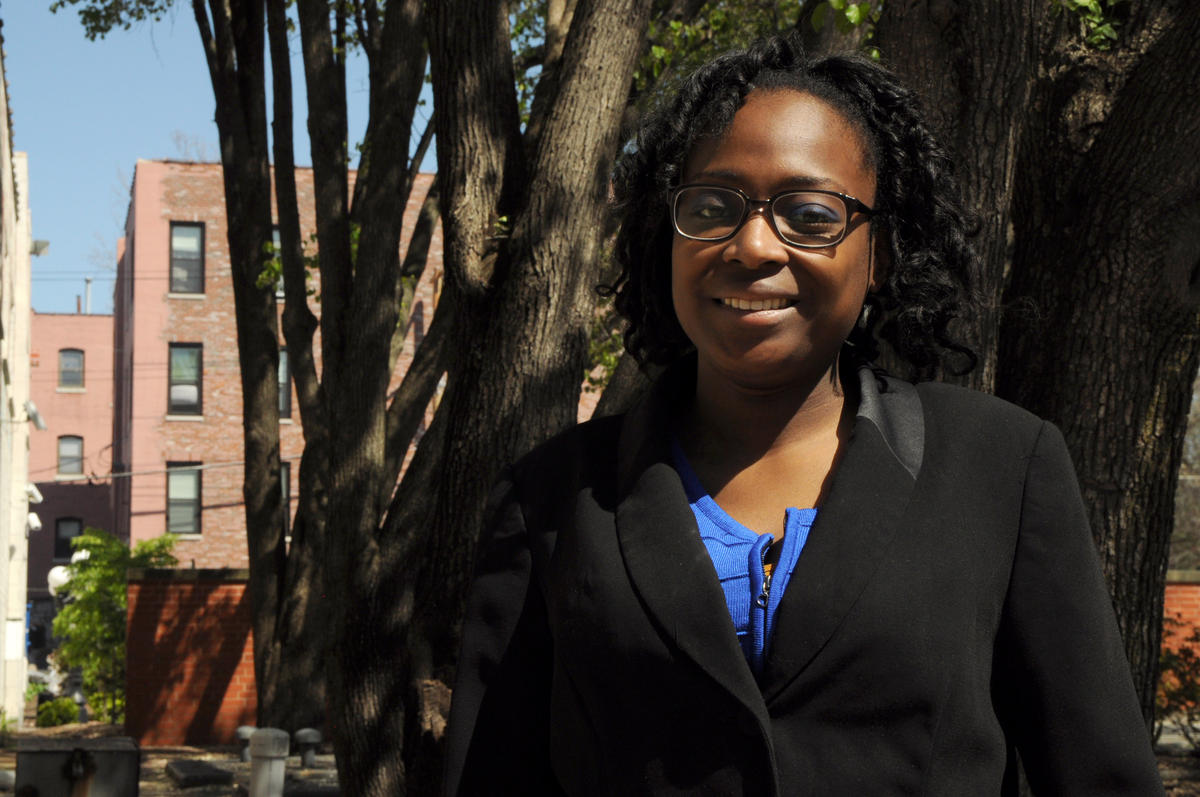 “The average wait is four hours,” said Teara Norris, 30, who was diagnosed with sickle cell disease as a toddler and avoids going to the emergency room unless her pain is unbearable. The hours spent in hospitals takes away from her work as a manager of a beauty salon and barber shop, and from her time at home with her 9-year-old son.

"They will give you an extra-strength Tylenol,” Norris said. “They underestimate sickle cell and what it does, the effects that it has on your body long term."

This frustration is not unique to patients in St. Louis. One study six years ago found that people with sickle cell disease waited almost twice as long as patients with kidney stones in the emergency room, even though they rated their pain higher on a one-to-10 scale.

In Missouri, the decision to prescribe is made in the dark

The thing about pain is that it can’t be measured like a heartbeat rate or blood pressure. It’s subjective, and the patient is the only judge.

“I do think we have a tendency not to give pain medications because I think there’s this thought that we do have a lot of seekers, and that is an issue,” said Dr. Paul Pfeiffer, the director of the emergency department at SSM St. Mary’s Hospital in St. Louis County.

Missouri is the only state without a Prescription Drug Monitoring Database, which shows how many prescriptions a patient has filled recently. So Pfeiffer and his colleagues are often making the call of whether or not to prescribe narcotics in the dark — the final decision is left up to the physician. 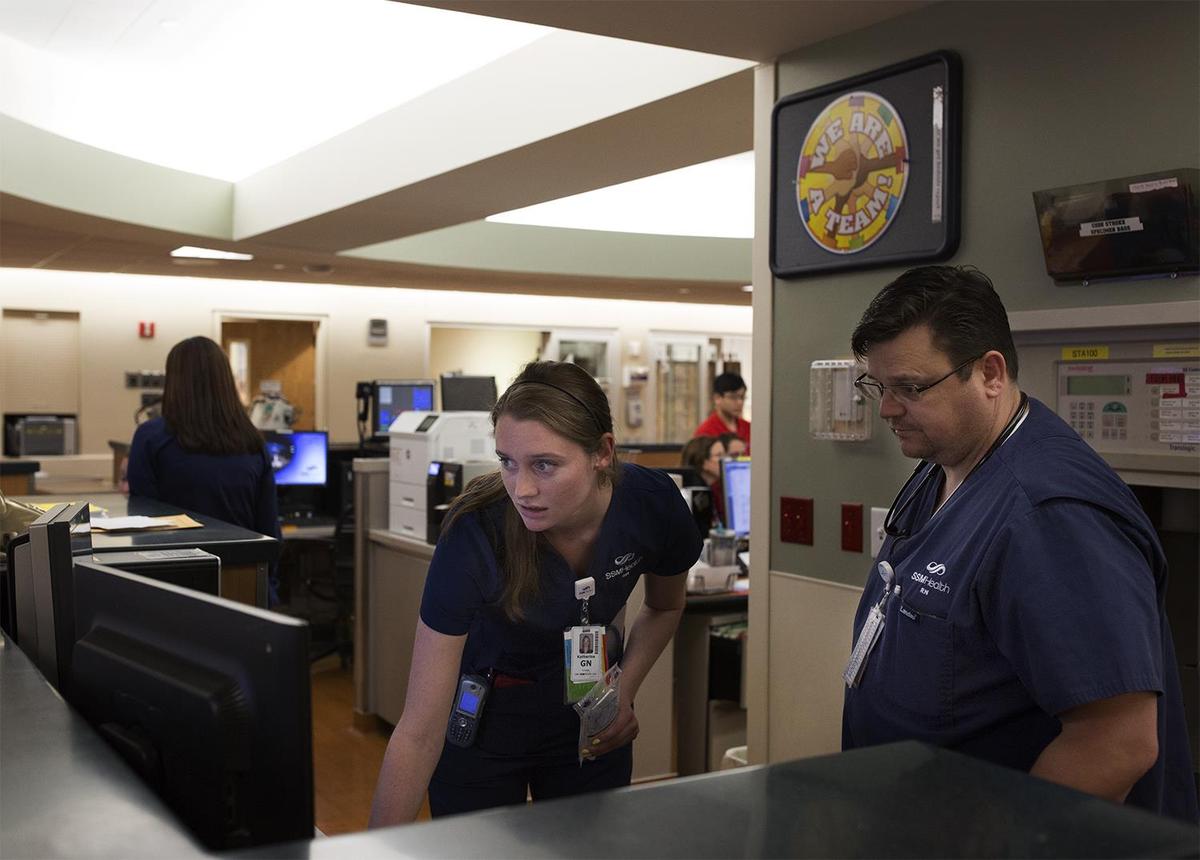 “They don’t have a tattoo right up on their forehead, says ‘I’m seeking.’ But I think you see the personality, the way they respond to some suggestions of what you’re going to do. Some become irate or they’re just inappropriate; you know there are some addictive patterns,” Pfeiffer said.

In a policy recommendation released to Missouri health care providers in December, six medical associations called for doctors to limit their use of opioid medications under specific circumstances. In March, St. Louis County passed a measure to set up a drug monitoring system of its own.

But some question whether these strategies put an impractical burden on physicians to figure out which patients are truly in pain, and which ones are addicted to narcotics.

“There’s sort of this lie detection mythology that runs through this area,” said Kelly Dineen, a former nurse and professor of health care ethics at Saint Louis University.

Especially in emergency settings, physicians are meeting new patients every day. Even seasoned crime investigators have a hard time discerning a lie, Dineen said. What makes us think doctors can do it?

Pfeiffer, who was named to his position two months ago, said he is in the process of setting up protocols to help treat sickle cell patients more effectively, including grand rounds with a hematologist to help staff understand the disease.

At a monthly support group meeting for sickle cell patients and their families in St. Louis, 45-year-old Ericka Greene asked participants about their most recent visits to the emergency room.

“It’s important for me to hear what issues you all have when you go to the emergency room, what things you’d like to see changed. And then I want to discuss some etiquette,” Greene said. 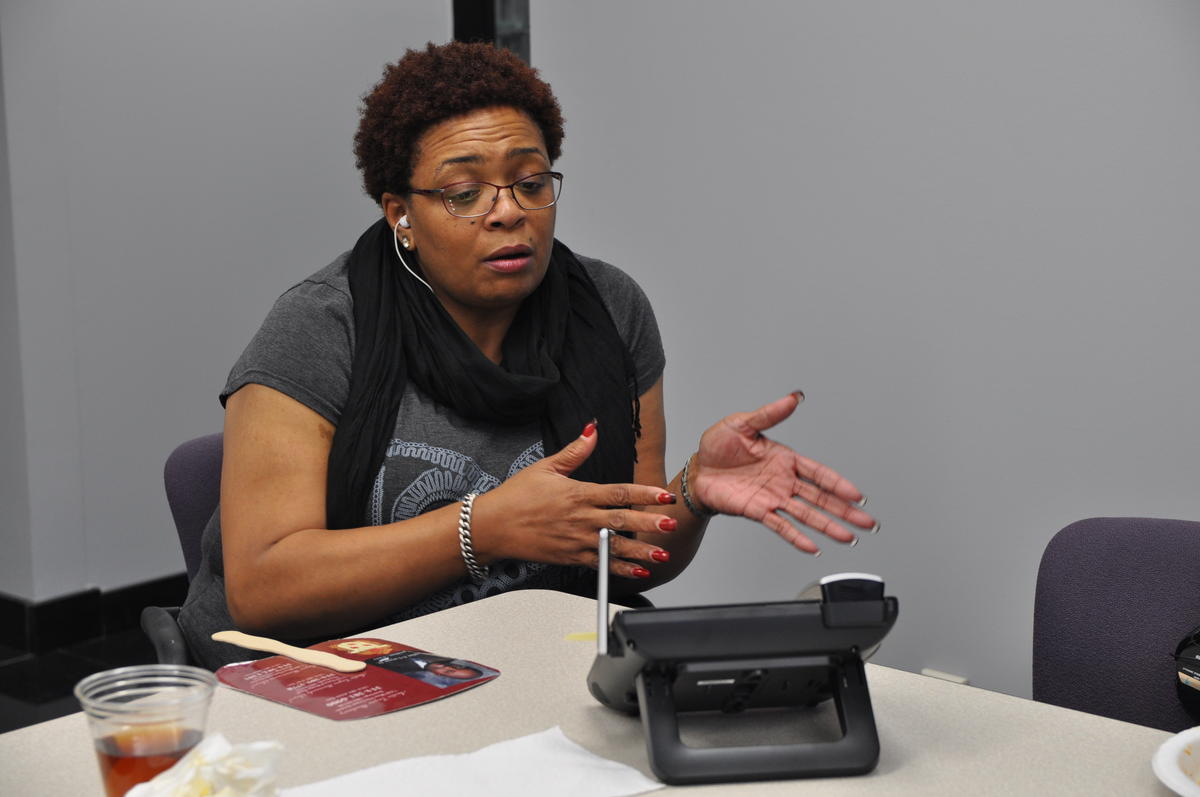 Seven people clustered around tables, munching on nachos at the Sickle Cell Association office in the Central West End. Another four called in and listened through a speakerphone.

Green has lived with sickle cell disease her whole life and knows the pain of a crisis. But she urged the group to stay calm, regardless of the circumstances. Tensing one’s muscles in frustration or anger can make the pain worse, she said. Ask a friend or family member to come along and advocate for you. And if a doctor isn’t taking your pain seriously, appeal to a supervisor.

“I don’t understand why there is such a stigma attached to a disease that is known to cause pain,” a mother from New York vented on the phone. Her 6-year-old daughter lives with the disease. “What is the stigma? Where did that come from?”

It’s part of the history of racism in America, answered 20-year-old Nia Sumpter, a student at Saint Louis University.

“And a lack of education. When people don’t know, they fear,” offered Tamnecca Reid, a 42-year-old mother of three. 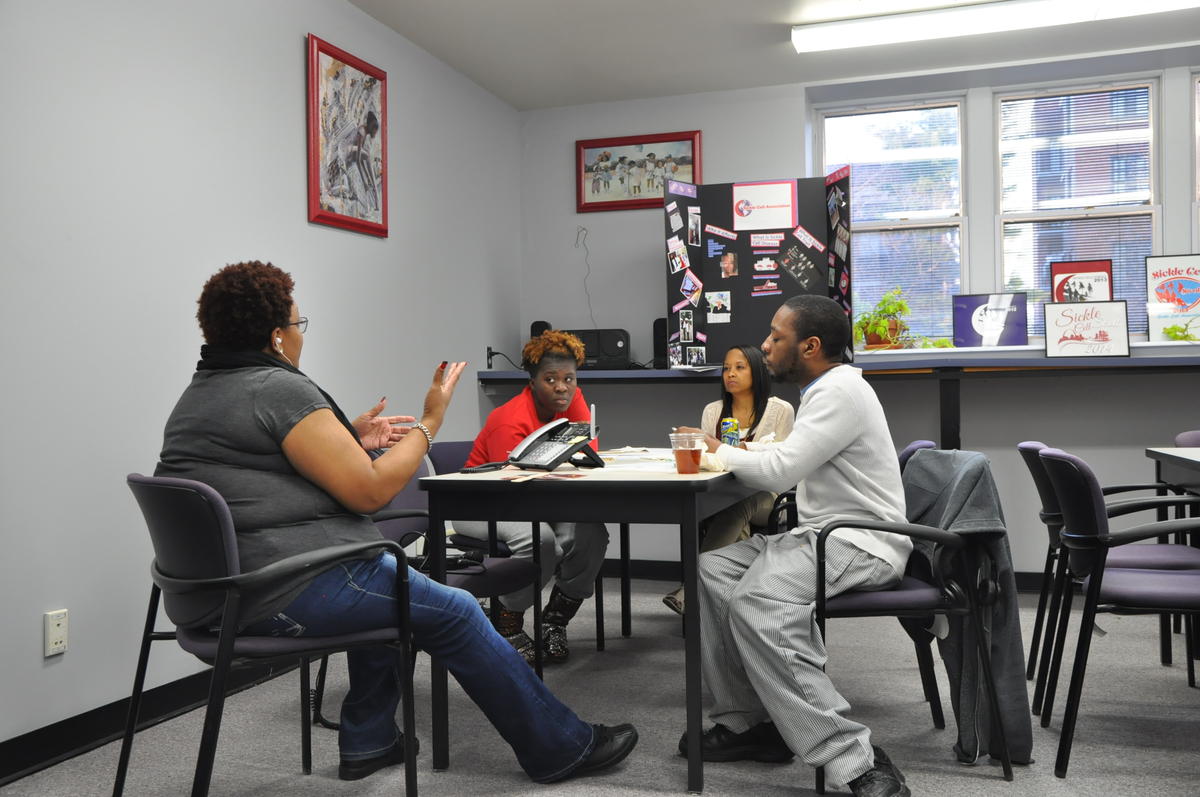 Members of the Sickle Cell Association are doing what they can to rectify the issue. Reid is completing training so she can advocate for sickle cell patients in medical settings. Rosemary Britts, the founder of the association, said she frequently invites medical workres to visit the support group and get to know sickle cell patients at a time when they aren’t experiencing intense pain.

In her office at Beaumont High School, Bolden-Myers said these are all the reasons why it’s so important for doctors and nurses to know and understand sickle cell disease, “regardless of what their reasons or their prejudices are.”

“You didn’t say that you would only service those who didn’t have sickle cell or those you didn’t feel were drug-seeking. You took an oath to serve everyone,” Bolden-Myers said.

And, she added, to do no harm.

More Sickle Cell Patients Survive, But Care Is Hard To Find For Adults

When Janoi Burgess was a child, he thought doctor appointments were fun.

“I used to love it because they had a section where you could play games,” said Burgess, who was born with sickle cell anemia, an inherited blood disorder. “They were really nice and friendly.”

But when he turned 21, the South Florida resident could no longer go to his pediatric specialist. Instead, he “bounced around” to various adult primary care doctors, none of whom seemed well-versed in the details of his condition. When he had a painful sickle cell crisis two years later, his only choice was to go to a hospital emergency department, where, he says, he waited three hours for pain medication.

“They triage you based on severity, and pain is not something that they consider as severe” as other conditions, he recently recalled. “One doctor even said, ‘Your labs are OK so you’re not in pain.’ It was crazy and insulting at the same time.”

At Richard Logan’s pharmacy in Charleston, Missouri, prescription opioid painkillers are locked away in a cabinet. Missouri law requires pharmacies to keep schedule II controlled substances—drugs like oxycodone and fentanyl with a high addiction potential—locked up at all times.

Logan doesn’t stop at what the law requires.

Several years ago, Missouri State Representative Holly Rehder’s daughter struggled with prescription drug abuse. “She had cut her thumb at work and went and got stitches and got a prescription,” Rehder recalls. When her prescription ran out she continued using the pain killers, says Rehder, “because they were so easy to obtain.”

Now, Rehder is sponsoring a bill to make it harder for addicts to obtain drugs in Missouri.

A major insurer said recently it would offer life insurance to HIV-positive people because of their rising life expectancies, prompting cheers from AIDS activists. But on the very same day,  the nation’s top disease control official described an America falling far short in its fight against AIDS.