Dogs interpret their surroundings mostly by smell, while we humans get most of our information through sight. And it’s no wonder: our canine companions have 300 million scent glands compared to our five million. That keen sense of smell is being used to train canines to detect glucose levels and save lives. If you’re an insulin dependent- type one diabetic, you may be able to improve your health by working with a diabetes alert dog.

I met up with Alice Martina Smith and her fluffy grey and cream Keeshond, Asti, at an Indianapolis mall where they were training for a service dog certification. Alice is in her fifties, and has been diabetic since age eleven.

Smith says that when she was younger, she could tell when she was about to have a hypoglycemic episode. She would sweat, shake, and feel a tingle on her tongue and lips. But like many with the disease, she became desensitized to fluctuations in blood sugar over time. And that’s dangerous. “A normal blood sugar is between 80 and 120; I’ve been 40 and not known it,” Smith tells me. “I’ve passed out at 35.”

Failure to recognize and react to those fluctuations can lead to diseases of the eyes, kidneys, nerves, and more. That’s where the noses of trained dogs come in handy. Jennifer Cattet owns and manages Medical Mutts, an Indianapolis-based business that trains medical service dogs. She says that when people with diabetes go into hypoglycemia, their bodies secrete an odor that dogs can detect.

However, that smell hangs around on the person’s body and clothes, even if blood glucose returns to normal. So Cattet must train dogs to recognize something very specific. “We have to teach the dog to ignore the smell on the clothes and pay attention to the changes,” she explains; “the moment where the glucose levels drop or rise."

Cattet uses cotton balls swabbed with the diabetic’s scent as part of the intensive training protocol. It can take weeks or even months to fine-tune a canine’s senses to tell what’s really happening in the person’s body.

Alice Martina Smith says that training Asti has paid off. “Yesterday in the office, she was with me, and she nabbed me twice at 42, and this morning I was sitting at the kitchen table and she let me know that my blood sugar was at 200. She’s on it,” Smith says.

Asti has been trained to paw Smith’s leg when she’s having a diabetic event. Then she pokes Alice with her nose to let her know her blood sugar is low, or spins in a circle to indicate it’s too high. Smith then uses a monitoring devise to test her glucose levels. She takes insulin if her levels are high; and if they’re low, she eats a carb-loaded snack. But not before rewarding Asti with a treat.

To become certified as a diabetes alert dog, Asti must pass a series of tests, such as sitting at Alice’s feet in stores, ignoring distractions and dealing well with strangers who want to pet her.

While having a diabetes dog does not replace glucose monitoring, according to Jennifer Cattet, it can offer an additional layer of security. Alice and a growing number of people with diabetes have found that they’d rather be attached to a four-legged friend 24-7 than to a monitoring device. 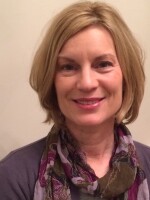 Sandy Roob
Sandy Roob is a contributing reporter with Sound Medicine and writes the health and fitness segments called “Help Yourself.” Prior to working with the program, Roob spent a decade as the host of “IU Update” that aired during IU Men’s televised basketball games. During that time she also worked as a media specialist at IUPUI and was responsible for overseeing media coverage for the School of Nursing and other university programs. Roob, an award-winning journalist, began her career as a television news reporter at WNDU in South Bend, Ind., where she wrote a documentary, numerous news series, and anchored the news. She has a Communications degree from DePauw University and a Master’s in Journalism from Indiana University.
See stories by Sandy Roob
Sick Season 2
Incarcerated people are some of the sickest people in our country. Many have chronic conditions such as diabetes or lung disease. And they’re far more likely to suffer from mental illness and addiction. On Season 2 of Sick, listen to stories of what goes wrong in corrections facilities — places meant to keep people healthy, but built to punish them.
Subscribe now