The regional winners of the 2021 Edward R. Murrow Awards, which recognize excellent journalism from more than 350 local radio and television stations, were announced Thursday.

Side Effects reporter Jake Harper won for continuing coverage in the large market radio category for detailing the pandemic’s impact inside Indiana’s prisons. Following months of stories, the corrections department began a comprehensive review of the Indiana Women's Prison and its warden retired.

Christine Herman, a Side Effects reporter who works for WILL in Urbana, Illinois, won for continuing coverage in the small market radio category for her work on COVID testing at the University of Illinois. She collaborated with Lee Gaines, who recently left WILL to become an education reporter at WFYI.

Sebastián Martínez Valdivia, a Side Effects reporter who works for KBIA in Columbia, Missouri, won the hard news award in the small market radio division for his reporting on the fears of workers at a food processing plant during the pandemic.

Valdivia talked about that story in a Facebook Live event for Side Effects. You can watch that here.

WNIN in Evansville, a Side Effects partner station, also won two awards in the small market radio category — excellence in innovation and excellence in writing — for its podcast COVID Between the Coasts.

Regional winners of the Murrow awards now move on to the national round of the competition. 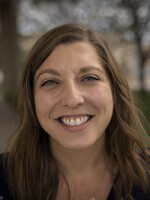 Lindsey Erdody
Lindsey Erdody is the digital editor for Side Effects Public Media and WFYI's education team. She can be reached at lerdody@wfyi.org.
See stories by Lindsey Erdody
Sick Season 2
Incarcerated people are some of the sickest people in our country. Many have chronic conditions such as diabetes or lung disease. And they’re far more likely to suffer from mental illness and addiction. On Season 2 of Sick, listen to stories of what goes wrong in corrections facilities — places meant to keep people healthy, but built to punish them.
Subscribe now