Community Health
Coronavirus: What You Need To Know
The new coronavirus and the disease it causes, COVID-19, have interrupted our lives in countless ways. Our coverage details the medical issues surrounding coronavirus -- and the way it's changing the Midwest.

With Trick-Or-Treating Limited By COVID, Some Turn To Outdoor Haunts

In some ways, this Halloween season is no different than in years past — despite COVID-19. Haunted houses still offer the creepy clowns and chainsaw chases that thrill-seekers have grown accustomed to. Young people making the transition from trick-or-treating are another annual staple.

“This is my first one … I'm shaking,” 14-year-old Elaine Demotte says outside the Grim Trails Haunted Attraction in Louisville.

Her father, Jon Demotte, knows COVID-19 has made this season different. That’s why he chose the area’s only outdoor haunt.

“At this point in time we've accepted a little bit more risk than normal. But we're still going to go out and have fun and do some fun things,” he says.

Grim Trails is a four-acre complex based on fairy tales, myths and legends. It’s been open for eight years, but owner Andrew Coombs made some changes to the operation this year.

For example, he expanded the queue area to create more space for social distancing. Groups that get too close to one another are separated by an employee patrolling with a flashlight. Coombs says those precautions, combined with requiring protective gear for guests and performers, allowed him to open.

“We didn't know for sure back in the spring, obviously, because things were brand new. And things were really crazy back then,” he says. "But as the summer progressed, we talked to some of the health officials and they say as long as you follow the CDC guidelines, you should be able to open. So that's what we did.”

Despite the pandemic, Coombs says Grim Trails is having one of its best years of business. Other recreational opportunities are limited, and some haunted houses didn’t open this year, so people are turning to haunts like his.

Baxter Avenue Morgue has also had steady business this year. Owner Quentin Stephenson says the decision to open boils down to the financial footing of haunted houses, which he describes as small businesses with only a handful of weeks to stay afloat.

“We don't have anything else supporting the morgue,” he says. “It's not any of our careers. We all have our own jobs outside of this place, and the morgue operates as its own entity. And if the morgue doesn't open, we have no money for startup next year.”

Neither haunt operator said COVID-19 has affected business much. But case numbers in Kentucky — like the rest of the Midwest — have continued to escalate throughout October.

Those spikes have led local and national health officials to advise against participating in indoor attractions like haunted houses — even though the Louisville haunts are allowed to stay open.

Louisville’s chief health strategist, Dr. Sarah Moyer, says just because something is open doesn’t mean it’s safe. Especially when Kentucky is among the states listed in the high-risk red zone for COVID-19.

“Use your own risk measure,” she says. “I recommend everybody follow the governor's recommendations that we are now in the red, and I would not consider a haunted house an essential activity that people need to do. So please have your haunted house scares at home and be safe."

Still, some people, like Diamond Avery, feel they are already exposing themselves to the virus through work and everyday life.

Avery works at UPS and says that if she’s going to spend time around others at her job, she might as well have fun around others, too.

“I've worked this whole time. So this is just another group of people,” she says.

At least 10 haunted houses are open in the Louisville area this year. The last night of operation for many is Halloween, though some will continue through the first weekend of November. 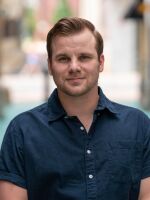 John Boyle
John Boyle is a reporter for Side Effects Public Media and WFPL, Louisville's NPR station. He can be reached at jboyle@louisvillepublicmedia.org.
See stories by John Boyle
Sick Season 2
Incarcerated people are some of the sickest people in our country. Many have chronic conditions such as diabetes or lung disease. And they’re far more likely to suffer from mental illness and addiction. On Season 2 of Sick, listen to stories of what goes wrong in corrections facilities — places meant to keep people healthy, but built to punish them.
Subscribe now